With more than 30 years on the market, LoFric has been used and documented in several ways. In addition to efficiently emptying the bladder, LoFric’s versatile use includes treatment and prevention of recurrent strictures,1 2 3 4 5 administration of chemotherapy by bladder instillation,6 7 and resolution of rare complications.8

For example, Montagnino describes general use of LoFric to facilitate and prevent surgical procedures of the urethra and bladder.9 Intermittent catheterization with LoFric has also been shown to have and impact on renal recovery. For example, Halleberg Nyman et al. show faster return of normal bladder function after surgery10 and Petterson-Hammerstad et al describe improved renal function in favor of intermittent catheterization with LoFric as compared to indwelling catheterization.11

This randomized controlled trial of 170 hip surgeries compared routine use of an indwelling catheter inserted in the morning of the day of the surgery to the use of intermittent catheterization when indicated after bladder scan measurements. Intermittent catheterization with LoFric was done if the patient was unable to void and if the bladder scan indicated more than 400ml of urine in the bladder. The study investigated post-surgery follow-up after 4 months, quality of life assessments using EQ-5D and SF-36 (SF-6D), and cost-effectiveness based on quality adjusted life years (QALYs). The results show no statistically significant difference in UTI rate between the groups although there were fewer events reported in the intermittent group. Use of intermittent catheterization was associated with faster return to normal voiding. Normal bladder function was de ned as post-voiding residual volume of 150ml or less detected by bladder scan. No differences in cost-effectiveness could be concluded from the results. The authors noted that their infection rates were reduced compared to earlier studies; from 52% in 2011 to 11% in 2013 and that this was likely related to increased use of antibiotic prophylaxis (Cloxacillin) and increased awareness of basic hygiene. 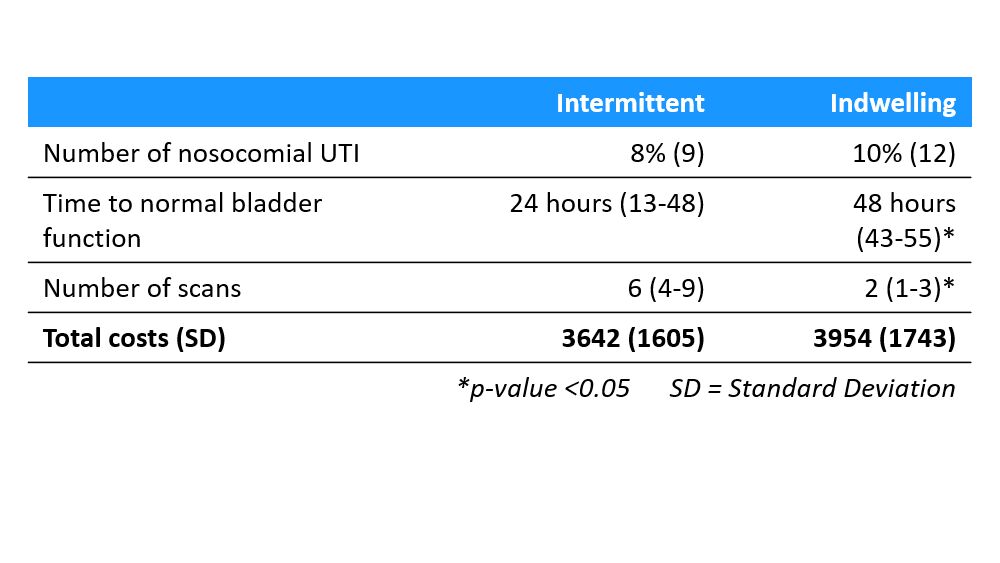 table based on results reported by Halleberg Nyman et al. 201310

"Renal function improves with time after injury and improvement is seen most clearly in the group that uses clean intermittent catheterization as a bladder emptying method.11"

"…the hydrophilic catheter should be a part of the urologist’s armamentarium whenever treating men with acute urinary retention.12"

"Case report on three rare events solved by LoFric use.8"